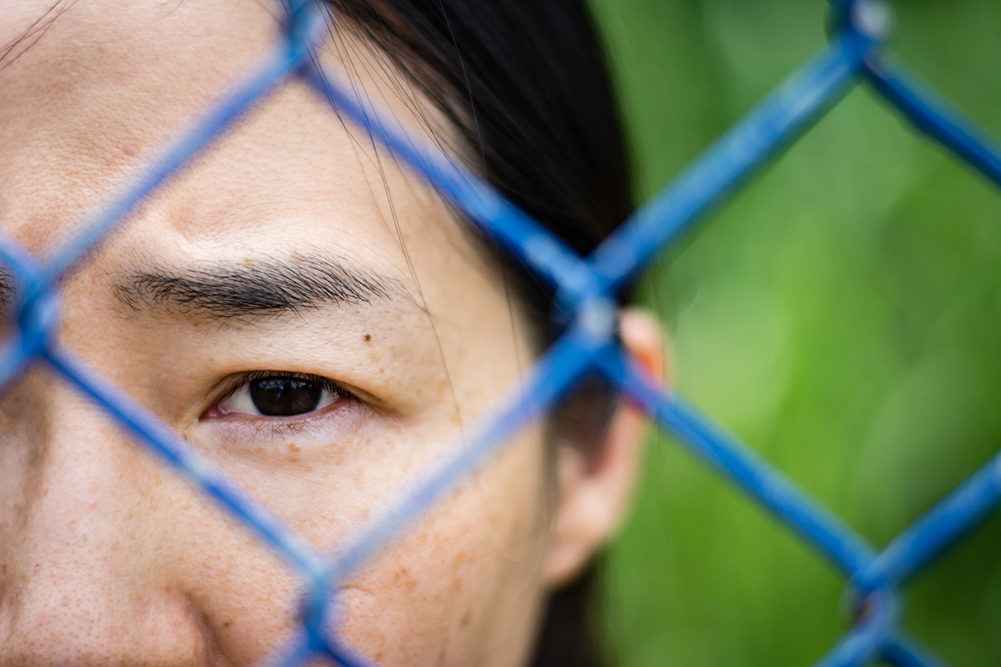 “It was as easy as listening,” said Amanda Rodriguez, advocate for survivors of human trafficking, when describing how she became an attorney.

“I remember the exact moment,” Rodriguez said as she recounted the day during her undergraduate studies at the University of Maryland, College Park when she walked across campus to class in the pouring rain. Her strides were accented with prayers as she thought about life post-college. She was unsure of how she would use her English degree upon graduation, further, she didn’t know which career she wanted to pursue. “All of a sudden I just heard, ‘Go to law school.’”

That same day, Rodriguez went to a career counselor who told her about a unique program offered through the University of Baltimore School of Law that would allow her to complete her first year of law school during her final year of college. She applied, got accepted, and went on to successfully complete her tenure at law school.

Rodriguez served the Maryland State’s Attorney’s Office for seven years—where she also joined the Maryland Human Trafficking Taskforce. She then transitioned to the Governor’s Office of Crime Control and Prevention for one year, before serving for three years as chief program officer for TurnAround, a non-profit agency that provides services and support to victims of domestic abuse, sexual assault, and human trafficking.

Rodriguez is currently transitioning to a position at another non-profit organization that also provides comprehensive services to survivors of human trafficking and aims to influence policy as it relates to trafficking.

“I fell in love with being the voice for people who didn’t have one. I found myself in the work. I found my voice, my strength. God led,” said Rodriguez.

“I Found Myself in My Work”

The genesis of her more than 10 years’ experience in the fight against human trafficking began while researching for a business writing assignment in law school. The topic was “buying and selling of any goods.” Rodriguez’s husband, who is an immigrant, inspired her deep passion for immigration law and reform. She wanted to incorporate immigration law into her assignment, but had difficulty thinking of an intersection of the two, however, when she consulted Google, “human trafficking” came up in her search results. Rodriguez completed her assignment on the topic; then she put the paper aside without giving it further thought.

Fast forward to her first job out of law school. She was hired as a prosecutor for the state’s attorney’s office. During her first year, God’s providence was seen with the passing of Maryland’s first human trafficking law that criminalized the act. While she was assigned various cases, she would eventually be involved with an average of 30 human trafficking cases a year.

“It was all God’s leading. I really had nothing to do with it. This was not my plan,” said Rodriguez.

In 2012, Rodriguez had a case that reaffirmed her life’s purpose.

“It was one of my first jury trials. I was really nervous about it. I had anxiety attacks.”

A part of the case rested on the testimony of a woman who appeared to be sympathetic toward her abuser. She did not want him to go to jail, and said she loved him. Even the detective assigned to the case told Rodriguez there was no way she would be able to testify the following day. However, later that same evening, the woman sat across from Rodriguez and asked her if she knew the song “I Knew You Were Trouble,” by Taylor Swift. The song is about a man who mistreated a woman.

“She told me, without telling me, that she’s ready,” Rodriguez said.

The woman testified then returned home. The trial took place over several days and at the end of the trial, Rodriguez called her with the news that the abuser was convicted. The woman said, “I think you saved my life.”

“No,” Rodriguez replied, “I’m pretty sure you saved mine.”

After some time passed, the same woman tracked down Rodriguez, who had transitioned to another job. The woman asked Rodriguez to attend her upcoming high school graduation. Rodriguez accepted the invitation, and she and her husband drove to the ceremony.

That thought has motivated her throughout her career.

“Every time I interact with a survivor, I wonder: Is it because of this one individual that God put me in this position? And it happens often.”

“Sometimes I have Esther moments, I think about the passage when Mordecai tells her, ‘Maybe God put you in this position for such a time as this.’ It touches me,” said Rodriguez. “I don’t know why God put me here, but I’m going to keep trusting that He knows what He’s doing.”

Expanding the Definition of Abuse

Rodriguez is the chair of her local church’s enditnow committee. enditnow is an awareness and support service of the Seventh-day Adventist Church primarily for victims of domestic abuse. Rodriguez has expanded the scope of her church’s ministry to include human trafficking.

While the program at Spencerville Seventh-day Adventist Church began with low engagement, there has been a shift as awareness continues to increase.

“It has been really impactful at our local church,” said Rodriguez, who has organized educational events not only for fellow members, but also for the church’s surrounding community.

Human trafficking is usually thought to be an international issue. According to a report by the International Labor Organization published in September 2017, an estimated 40.3 million individuals are victims of human trafficking for forced labor and sexual exploitation. While it is an alarming epidemic, the United States is not excluded from what human rights experts call “modern day slavery.” In 2017, the National Human Trafficking Hotline in the U.S. received 26,557 calls and reported 8,500 cases of human trafficking.

Rodriguez says there are many ways a local church can help this cause. The first step is to have a willing heart.

“Sometimes I’m disappointed in the church’s response to local issues, and this is what I see as a local issue,” said Rodriguez. “If we’re supposed to follow Matthew 25:40: ‘Truly I tell you, whatever you did for one of the least of these brothers and sisters of mine, you did for me,’ these are the people we can help and can bring to the church. We just have to be willing to do the work.”

The second step is to know the signs.

“It depends on the type of trafficking,” Rodriguez explained. The various types include domestic servitude, commercial sex trafficking, and labor trafficking. Brothels operate in apartment buildings and hotels. In cases of sex trafficking, “you’d see ‘watchers,’ people standing outside doors or constantly looking out of windows,” said Rodriguez. In hotels, men bringing multiple women in their rooms is often another sign of trafficking. Rodriguez says it’s also prevalent in many massage parlors.

According to Rodriguez, church members should next utilize resources that are available in their communities.

“Start by connecting with your local rape crisis center. They are doing the work or are willing to do the work for victims of human trafficking,” said Rodriguez.

On a larger scale, Rodriguez believes the Adventist Church is positioned to address critical areas that directly affect the lives of human trafficking survivors, including affordable housing, and the opioid epidemic.

“There are social problems that need to be fixed . . . I think the church can engage on those levels. We have the resources, we just have to be willing to open the doors.”

Human trafficking is believed to be the third-largest criminal activity in the world, and has no demographic restrictions, according to the Federal Bureau of Investigation. “There are horrific stories,” said Rodriguez. “But [it’s inspiring] to see the strength of survivors. It’s made my faith stronger.”

“At the end of the day I understand this is sin and the work of Satan, but it won’t stop me from doing what I’m doing. I know this is my purpose and I know God has led me on this path.”

Rodriguez and her husband, German, who is also an attorney, met at Highland View Academy. They live in Maryland with their two children.

— Mylon Medley is an assistant director of communication for the North American Division.

At the NAD CALLED Convention, Pastors Pitch Evangelism Ideas for an Opportunity to Earn Funding

On June 22, 2022, in Lexington, Kentucky, the North American Division Ministerial Association awarded a total of $120,000 to 15 pastors as part of an “evangelism shark tank” competition for innovative soul-winning ideas.

A Sweet Singer in Israel, Walter Arties III, Passes to His Rest

“Some people have a dream to do something special and then they work and plan and negotiate and just keep pressing and twisting arms until enough people say ‘Yes!’ They do what they dreamed. This was Pastor Walter Arties and his dream — Breath of Life!” ... The dreamer, the man with the velvet vocals, Walter Eugene Arties III, passed away June 26, 2022, at age 80.

At the CALLED convention PK Journey event, the warmth of colorful ambient lights, and the gentle glow of a giant video screen illuminate 400 young faces in the darkened auditorium. Some are in their seats, others have come forward to be closer to the front during praise time.

“Why Does the Church Exist? Do We Draw People to Jesus?”

It’s afternoon at the CALLED Convention and the bustling lunch crowd is starting to disperse. A few of the remaining wanderers pause under the bright blue CALLED banner to check today’s schedule of events. Guests who didn’t plan ahead are faced with a choice. Which of the many educational seminars will they visit this time?

Veteran historian and educator, Brian E. Strayer, at Andrews University would famously offer in class a reward of $100 to any student who could find a photograph of Sarah Lindsey (1832-1914), the first woman licensed as a Seventh-day Adventist minister. This challenge remained until a recently discovered photograph in the George I. Butler Collection at Loma Linda University provides a picture of a “Sister Lindsey.”