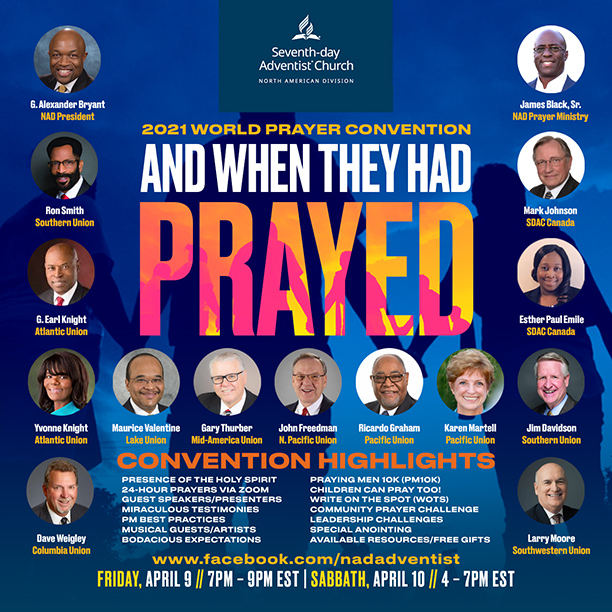 On April 9-10, 2021, the North American Division will launch its 2021 Prayer Convention, “And When They Had Prayed,” a theme based on Acts 4:31. While the event calls for “24/7-style” prayer, two special features of the program will livestream on the NAD Facebook page.

On April 9, viewers can watch from 7-9 p.m. EDT; on April 10 the livestream runs from 4-7 p.m. EDT. The first evening includes a sermonette by G. Alexander Bryant, presentations from union leaders, testimonials, special prayer, and music. Day two will consist of similar content with union leaders and James Black Sr., NAD Prayer Ministries coordinator, speaking, plus a special anointing experience and leadership challenge. And at 6 p.m. EDT on April 9, an all-night Zoom prayer meeting will commence for church members across the division who received an invitation.

“We are claiming the promise that God will use this experience to bring glory and honor to His name however He chooses,” said Black. “With the pandemic, politics, and social justice issues dominating the world news, it is time for God’s people to heed the call by coming together to change the narrative through earnest prayer. If ever there was a time to experience a healing in the land, that time is now.”

Black shared that this event should not be characterized as a retreat, a summit, or a conference. “This is a full blown, world series convention for us to be able to stand still and see the salvation of the Lord. The Bible lists multiple conventions where God showed up and showed out,” he said.

During the two-day convention, union and the division leaders will share short messages based on their personal prayer witness. Prayer coordinators from across the division will follow with a prayer experience — a 24-hour Zoom meeting that hundreds will join on April 9-10.

“We have tracked down some of the most powerful testimonies of God’s miraculous power, and we will be spiritually blessed by some of the best musical talent in the world. In addition, we will be launching Praying Men 10,000 (PM10K), a call for a minimum of 1,000 men within each union to join the thousands of women and men who are already committed,” Black added.