Randy Robinson, North American Division treasurer, introduced the 2019 treasury report with thanks to G. Thomas Evans, previous treasurer. He then shared 2 Chronicles 7:14 as he opened his report on Nov. 4.

Robinson shared highlights from the 2018 audited financial statement, including operating fund trends, working capital, and tithe. He reported that although the operating fund assets dipped for 2017 after the NAD purchased its headquarters building, the 2018 figures show an upward trend. Robinson reminded the executive committee that “we own this building outright. So you can see the important trend there: if we look at our whole operation, our assets are increasing modestly.”

Working capital, explained Robinson, has dipped — in 2017 it was 78 percent — but is also trending up with 2018 showing 85 percent. A working capital of 100 percent is optimal.

“The most important metric that I use for financial health of the organization is the number of days of cash on hand,” explained Robinson. He shared that the NAD had 209 days of cash plus investments available in 2018. It was 220 in 2016, and 194 in 2017. “Recommended working capital as a North American Division policy says you should have a certain amount of assets available to you to do business. The number should be between 180 and 210 days of cash. Right now we are at 185 with the trend going up,” he said. 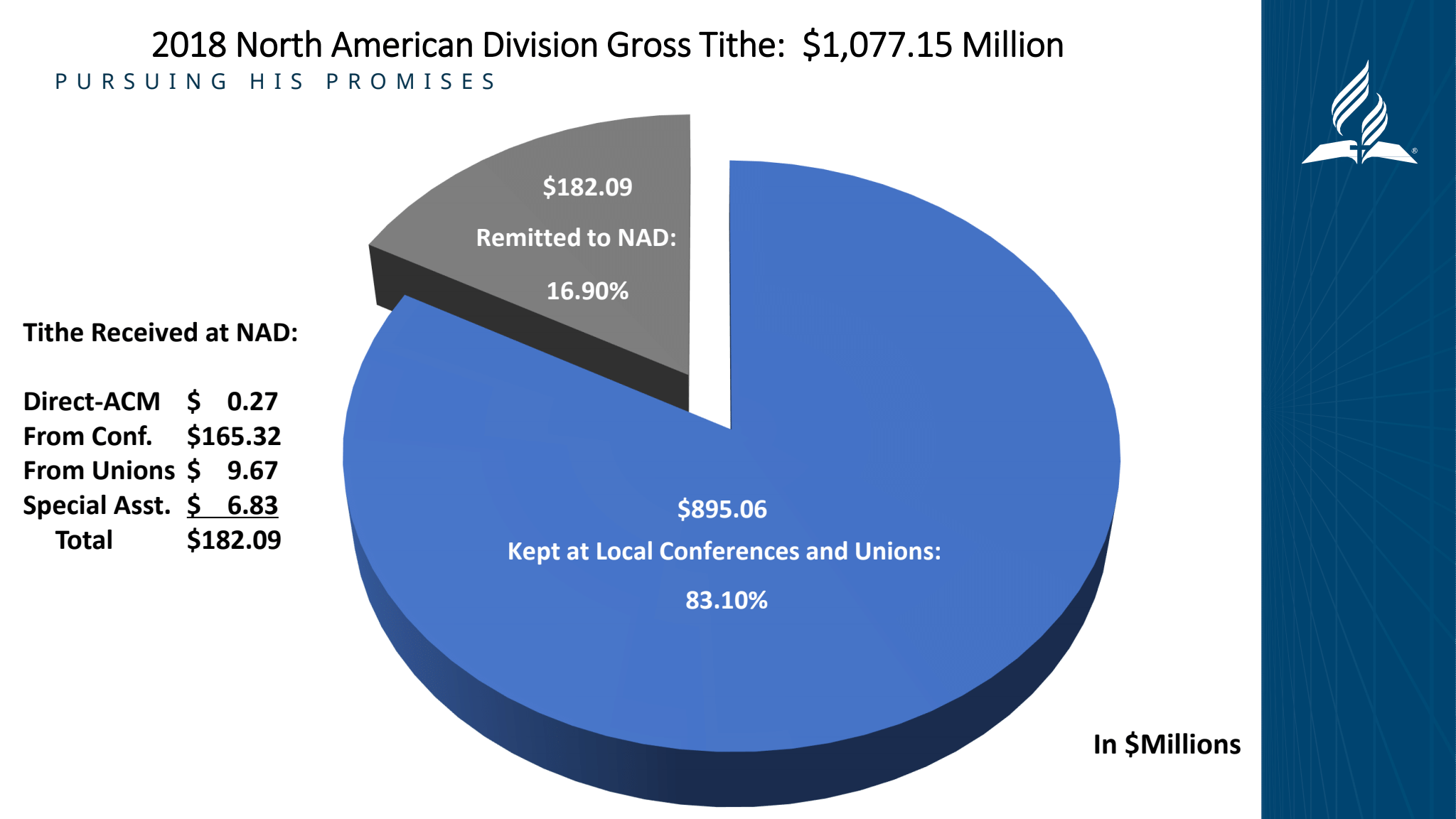 Gross tithe in 2018, Robinson reported, was almost $1.1 billion. “Can someone say ‘Praise God’? That’s amazing! Thank you, Grandma and Grandpa Jones,” Robinson declared. He attributed some of the increase in 2018 to the stewardship emphasis in the Adult Bible Study Guide for the first quarter of Sabbath School.* “Every single union had a gain in 2018,” he reported.

In describing tithe allocation, the largest part of that is used for Adventist Education, Robinson said as he showed a pie chart of the total distributed of tithe received. 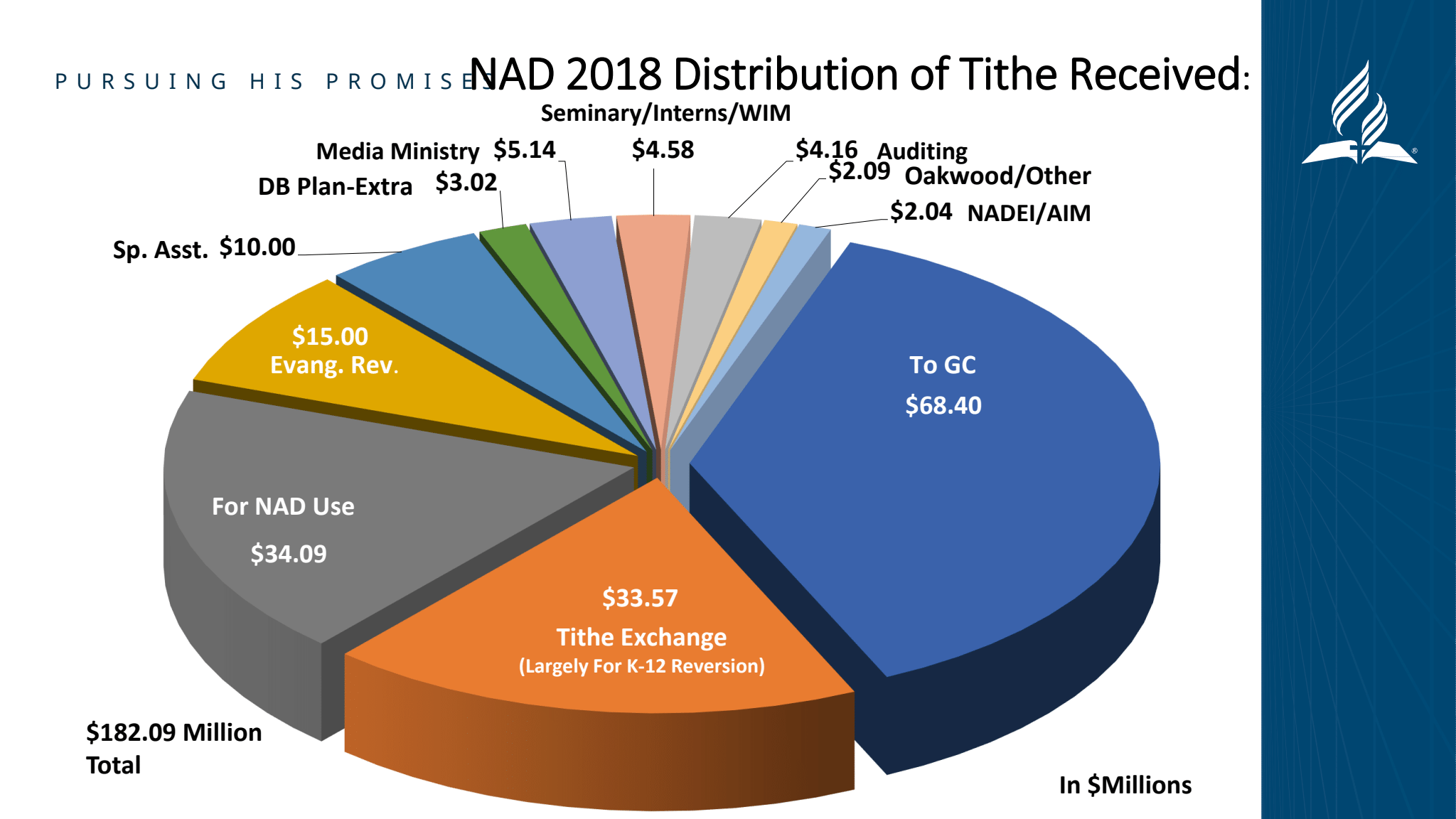 Robinson also shared where the division is currently for 2019. “Through September, our tithe is down year-to-date by about one percent; two of our nine unions had a gain. Lake Union is leading the way with a [gain of] 2.33 percent,” Robinson reported. “I anticipate close to breakeven for 2019.”

Robinson also gave the investment, remuneration, and 2020 budget reports. The executive committee voted to receive these reports. Robinson, at the conclusion of his report, thanked the treasury team for their hard work throughout the year and at YEM. He then invited Mike Jamieson, NAD undertreasurer, to the platform for recognition of service to the division. As Jamieson was congratulated by Daniel R. Jackson, NAD president, and G. Alexander Bryant, NAD executive secretary, Robinson read the words to be inscribed on a special clock memento: "With gratitude to Michael R. Jamieson for ten years of dedicated Christian service to the North American Division and to the Seventh-day Adventist Church from 1979-2020. Thank you for your legacy of leadership." Jamieson retires this year.

Robyn Kajiura, General Conference Auditing Service associate director, North America, went into some detail on the auditing report, explaining that of the 319 NAD clients, most of which are in the education system, 83.2 were “standard,” with high accuracy.

“It was a good audit, considered ‘clean or standard opinion,’” Kajiura said.

After an up to 1.6 percent cost of living wage increase was voted, at the end of the session, a motion on the floor to address the remuneration disparity in conferences and entities that may not be on scale with other conferences and entities passed. Addressing this issue would include reporting complete information on any disparity in the division.

In the morning on July 19, 2021, Oakwood University, located in Huntsville, Alabama, held a ribbon-cutting ceremony to celebrate the completion of the Peterson Hall renovation. The building has been completely renovated to include residential use as well as offering a full conference center.

Nicholas P. Miller, Andrews University professor of church history and director of the International Religious Liberty Institute, recently presented a policy paper on the topic of “COVID-19 and Religious Liberty” at a Freedom of Religion or Belief working group that met in conjunction with the pre-meetings of the G-20 in Matera, Italy, from June 28–30, 2021.

This year, the North American Division (NAD) has designated July 24 as Health Sabbath. Eight Southern Adventist University students, alumni, and staff worked with the NAD to provide resources for youth and young adults.

Three science professors from Southern Adventist University contributed to a book released this summer titled Design and Catastrophe: 51 Scientists Explore Evidence in Nature. Published by Andrews University Press, the book includes a variety of short essays written by men and women of faith from a wide range of scientific disciplines.