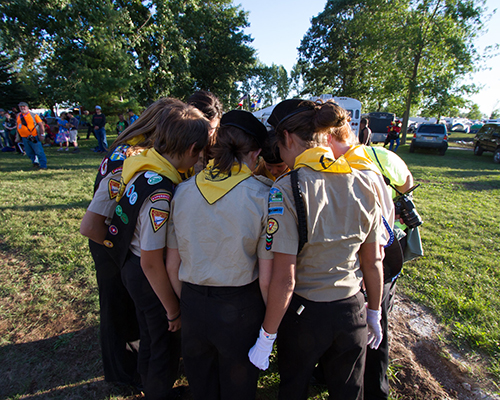 What if I told you that spending a full five or six days in an open field, surrounded by 50,000 people or more, walking five to 10 miles per day, having to go to porta potties and bathe in shower houses, and sleeping in a tent and trying to keep up with a group of teens and preteens would be the best experience that you could ever have this summer? This is what happens every five years at the Experimental Aircraft Association (EAA) airfields in OshKosh, Wisconsin.

For the past 34 years the Pathfinder Club ministry of the Seventh-day Adventist Church in North America has gathered in different places.1 From Colorado to Pennsylvania to its current location in Wisconsin, this gathering of young people and leaders has continued to grow at an amazing pace and has become the event for anyone and everyone who enjoys being a Pathfinder. You might ask: “What is Pathfinders; and why do you want to ‘suffer’ for almost a week, sleeping on the ground and dealing with preteens and teens?”2

Let me tell you the story that helped me understand this ministry. While pastoring a small two-church district in south Texas, I had the opportunity to revitalize the Pathfinder Club ministry. The churches, with a combined Sabbath attendance of 80, hadn’t had a Pathfinder ministry for years. As soon as I arrived in early 2008, we started to dream about having a Pathfinder Club, and also about going to this big event occuring in Wisconsin. We had about a year to prepare, fund-raise, get our tickets, and plan our 30-hour bus trip. We started looking at budgets and we realized that to get to Oshkosh in 2009, we would have to work hard to raise the money.

There were moments when the leaders and parents asked whether we’d make it. There were church mortgages, local church expenses, and many other important things to pay for, and sometimes we didn’t know where the money was going to come from. But lo and behold, we raised enough money to take 31 people (15 Pathfinders and 16 staff members).

The trip was long, expectations were high, and anxiety was heavy, but the moment we got to the place and lined up to enter the camp premises as part of the 40,000 people gathering there, it became the experience of a lifetime for many of those Pathfinders and parents. Yes, we walked a lot; yes, we slept on the floor; yes, the bathrooms were not what we were used to; but the youth had fun! They connected with young people like them from all across North America, and even from other parts of the world. They experienced “church” as they could not have in their church back home. They learned about Queen Esther in a different way, and their worldview was transformed.

We were all tired at the end, but after this camporee the kids and their parents were never the same — in a good way. Youth ministry impacted and revitalized at my local churches because of this event.

I have no doubt that a similar thing will happen this month as Pathfinders gather again on the EAA airfield.

Wouldn’t you want that to happen in your church? Support your Pathfinder Club and the Pathfinders in it. If you don’t have a club in your church, contact your local conference youth ministry department and ask for help to start one.

It isn’t too early to start thinking about the 2024 International Pathfinder Camporee!

2 See www.pathfindersonline.org to learn about Pathfinders; visit vimeo.com/265203931 for the 2019 camporee promotional video.

— Armando Miranda, Jr., is Pathfinder director and associate director of Youth and Young Adults Ministries for the North American Division.

Although Adventist Pharmacy Worker’s Case Declined by Supreme Court, Case Moves Cause of Religious Liberty in the Workplace Forward

On Monday, February 24, 2020, a nearly nine-year journey came to an end when the U.S. Supreme Court declined to hear Patterson v. Walgreens. This case came out of Walgreens’ decision to terminate Darrell Patterson because he failed to work on a single Sabbath in 2011. ... While it is disappointing that the court did not take Patterson, the fact is his case moved the cause of religious liberty in the workplace forward immeasurably.

In the Lake Union, Young People Encouraged to Get Creative with Evangelism Methods

At the 2019 General Conference Spring Meeting, two world divisions of the Seventh-day Adventist Church officially entered into a partnership with the North American Division’s Hope for Humanity’s (HFH) literacy program, Partners in Mission. From these partnerships, training is now occurring in India, with the new Hope 4 Kolkata program. And in the Philippines, HFH’s Partners in Mission is working with the well-established SULADS missionary organization to bring literacy to adults in remote areas.

On Feb. 7, 2020, after nearly six months of preparation, the Oakwood University Ambassadors met their competition at Claflin University in Orangeburg, South Carolina, for the Honda Campus All Star Challenge (HCASC) National Qualifying Tournament (NQT). Oakwood’s team emerged as the winners of this NQT.

A Legacy of Volunteering

I sometimes wonder how my dad would have turned out if he had not been recruited by the Civilian Conservation Corps. Would he have succumbed to a life of crime? If not for those life experiences and lessons, would he have raised a family that now includes ministers, teachers, medical professionals, decorated war veterans and yes, the director of the Office of Volunteer Ministries?