On the second day of the 2019 North American Division Year-End Meeting, G. Alexander Bryant started the secretary’s report with Isaiah 40:31, telling the executive committee that whatever challenges come, even when “we scratch our heads and ask, ‘What are we going to do,’ we’re going to stand on the promises of God.” 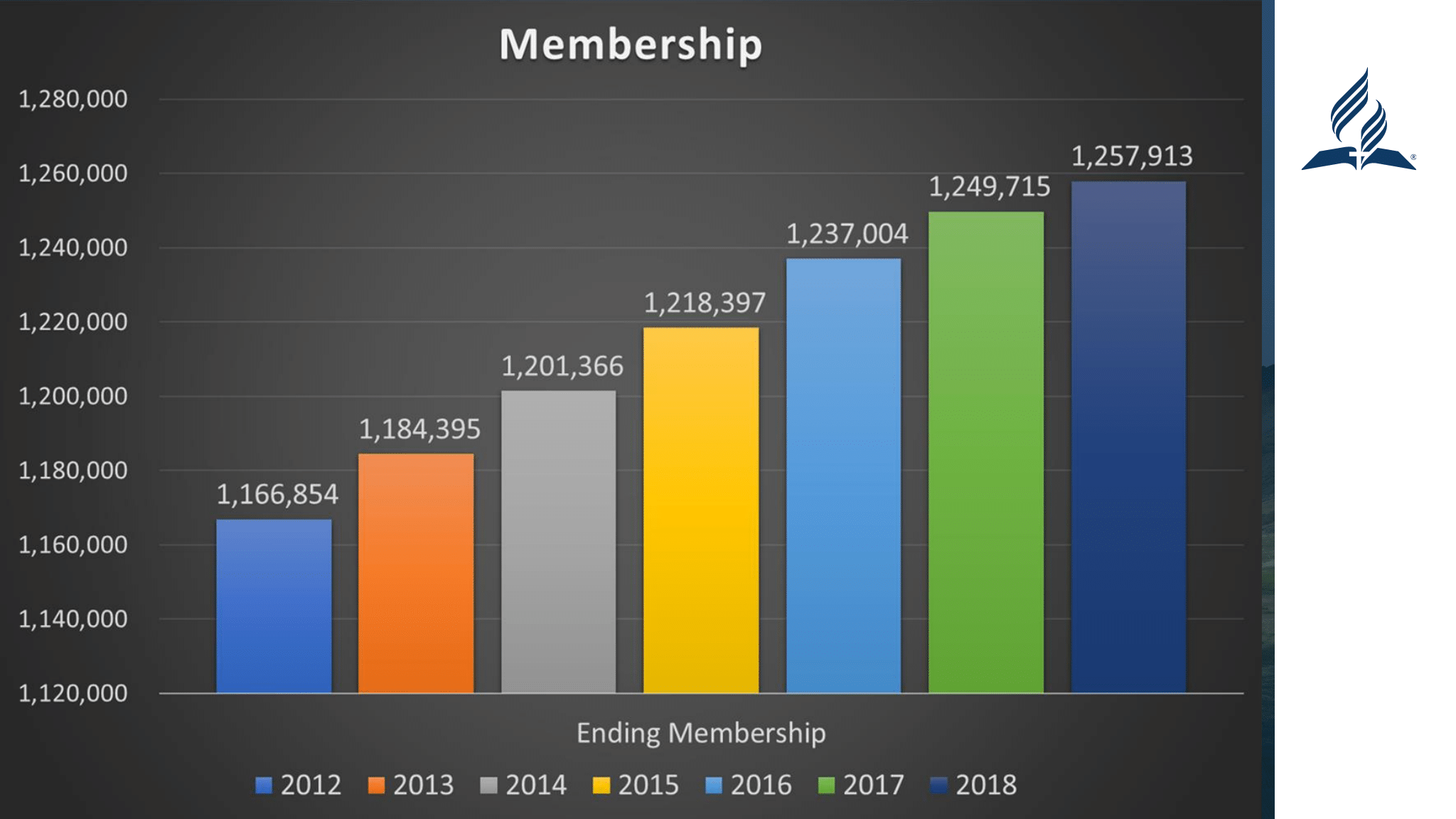 After thanking the secretariat team, Bryant went straight into membership figures. He shared that the NAD membership stands at 1,257,913 as of December 2018. There are 5,606 churches and 865 companies in the division. Five years ago, said Bryant, the NAD had about 6,000 church congregations, “now we’re closing in on 7,000. We are thankful for our church planting initiative.”

According to research shared by Bryant, Christianity, in terms of numerical growth in the North American Division region (Canada and the U.S.), is stagnant. But the Adventist Church has shown steady growth. He said, “To still be moving in a positive direction is a blessing of the Lord in our territory. With the exception of a couple areas, there’s still been steady growth, about two to three percent.” Overall growth is the largest in the Southern Union Conference, while the Southwestern Union Conference is the fastest growing in the division. The Guam-Micronesia Mission is also showing steady growth.

Bryant shared that the NAD had its most significant recent growth in 2009, the designated Year of Evangelism. He said he is excited about 2022, the year when the Ministerial Association’s division-wide initiative “Multiply” will commence. “Even though different unions designate a year of evangelism or a focus, there’s something special that happens when we do that corporately,” said Bryant. “We’re looking with great anticipation on what God is going to do in the year 2022. Because when we start talking about it and doing it and putting focus on it, we see amazing things happen.”

Bryant also shared membership losses. “This is the one that always breaks my heart every time I look at it, and I’m going to keep showing it until we see these numbers change,” he said. From 2013 to 2018, the total loss of membership from deaths, missing members, and those dropped from church membership was 123,593. With 214,621 accessions in the same time frame, from baptisms and professions of faith, there is a net gain of 91,028. With the gains and losses as they have been trending, Bryant said that “we will lose as many people that we gain. And so we need to find a way. We have a segment on nurturing retention that we’re going to have a conversation about. We need to find a way to stop that bleeding in the church.” 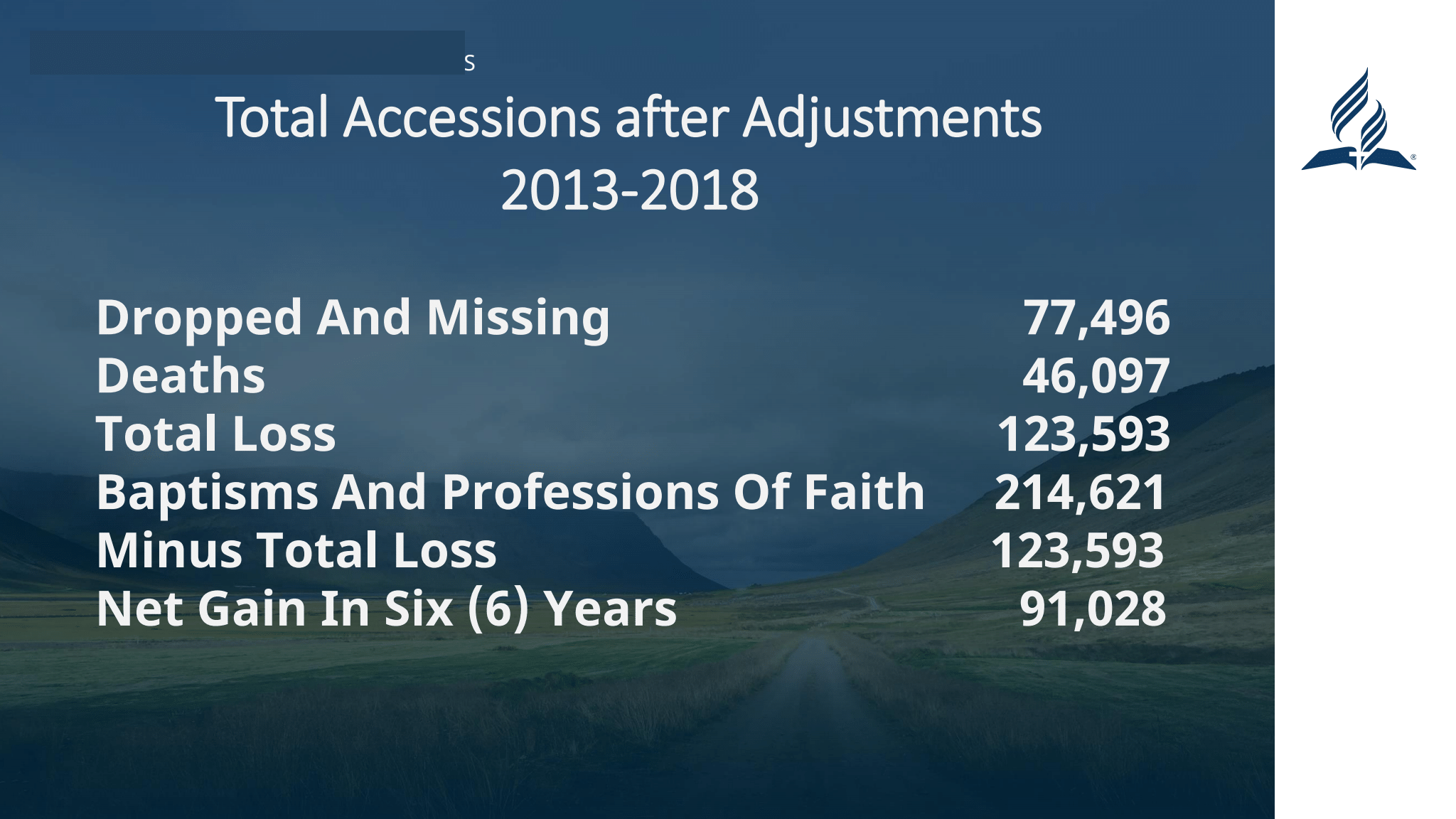 Ernest Hernandez, director of the Office of Volunteer Missions, gave the volunteer missions report. He shared that there are 50,839 in missionary service from the NAD, which includes group and individual deployments.

In regard to the number, Bryant mentioned that in a recent survey, 50 conferences reported that they were doing mission work outside the division. These are numbers from the local field and are not represented in the division figures.

The key to success, said Hernandez, is organized mission work. He shared two examples, the Pennsylvania and Chesapeake conferences. Pennsylvania incorporated an organized, 5-year approached to mission work within their conference, where the region was broken into sections, with more than 8,500 missionaries, with specific goals about reaching out. Upon analysis, the conference had record tithing, record baptisms — and an unprecedented membership growth of six percent.

According to Hernandez, the Chesapeake Conference made a major, concerted effort in Panama, building churches, library, and water reservoirs. Serving as a catalyst in the country, results included 35 new churches, and the establishment of a new conference. Another outcome is that Chesapeake’s missionary work has helped make Adventism the dominant faith (at a 5-to-1 ratio). Before the work in Panama, the Chesapeake Conference also served in Belize and Honduras.

“That is the power of organized missions,” said Hernandez. “We have missionaries in 70-90 countries of the world, about half the planet.”

In conclusion, Hernandez revealed details about the GO Ambassadors initiative, which will utilize returning missionaries to tell their stories. This would include visits to college campuses and churches, the One Year in the Life of Missions vlog, and the Mission Trip Connector — all used to promote missions.

Carolyn Forrest and Brian Ford each shared information from their respective departments within secretariat. Forrest, associate secretary-director of NAD Human Relations, Interdivision/International Service Employee Resources, and Archives and Statistics, talked about the increase in diversity and inclusion in the division with video reports from most of the nine unions comprising the NAD. She also shared a report from the human relations advisory.

Brian Ford, assistant director of eAdventist, the entity that maintains the church membership list among other responsibilities, divulged that eAdventist analyzes membership — and can provide data on membership for union and conferences in regard to growth, gender, and age as it has birthdates for at least 70 percent of the membership in the division.

Bryant concluded his report with a story about a pastor who bought a fire-engine red 1966 Chevelle. The pastor went through Memphis, Tennessee, to get to Oakwood in Huntsville, Alabama, with a group of students. On this journey, a 1960 Volkswagen Beetle pulled up to him at a light. The pastor pulled off, but VW beat him to the next light. The pastor thought, How dare you disrespect the Chevelle!The VW beat him again. Indignant and upset, the pastor forgot he had the kids and that he was a pastor. I’m gonna beat this guy to the next light.He again found himself trailing the VW.

The VW driver pulled over, and so did the pastor. The pastor was embarrassed, the other guy laughed. The driver took pastor around to back of VW, lifted the lid, and pastor saw that the driver had retrofitted the VW with 911 Porsche engine.

The North American Division honored three retiring vice presidents through a virtual event that gave colleagues the opportunity to express their gratitude and share memories of the outgoing leaders. Alvin Kibble, former vice president for executive coaching, training, development, public affairs and religious liberty, literature ministries, and social media and big data; Paul Brantley, vice president for strategy and assessment; and Gordon Pifher, vice president for media ministries, received heart-felt spoken and written messages on May 12, 2021, from administration and staff about the legacy they’ll leave behind as they enter retirement.

It Is Written Wins 10 Telly Awards

Merely 12 months ago, the Carolina Conference Ministerial Department had hosted more than 1,000 attendees at the fourth annual Evangelism Impact at the Landmark Resort in Myrtle Beach, South Carolina. In this uncertain year, the event went virtual, with a similar number of attendees joining online.

The Seventh-day Adventist Church in Canada mourns with the families of the Tk’emlúps te Secwépemc First Nation and all the Indigenous Peoples of Turtle Island (Canada) following the discovery of 215 unmarked children’s graves at the former site of the Kamloops Indian Residential School.

The annual young adult film festival sponsored by the North American Division became an extended virtual experience through a six-session-long program on Gather.town, a customizable video-conferencing space that allowed for enhanced virtual interactivity among attendees. Sonscreen Film Festival 2021 took place every Friday, from April 2 to May 7, from 4-6 p.m. EDT, on the gamified platform that has been described as a combination of Zoom and the “Among US” video game.