Prestol-Puesán gave his affirmation to the NAD treasurer for a report that is “comprehensive, well-put together and — in the middle of a difficult time — optimistic.”

He thanked Robinson, adding, “Thank you, officers of the North American Division, for keeping a steady hand, and moving things along in a wise and careful manner.”

Before diving into his report, Robinson provided a framework for the financial state of the division against the backdrop of the COVID-19 pandemic, social unrest, and political issues. “We started out 2020 very strong financially, with double digit tithe increases through January and February,” he started. “But then in March the COVID-19 crisis arrived. Businesses began to close. There was significant and sudden unemployment, as well as extreme marketplace volatility. There was some social isolation and an unprecedented rise in virtual communication. Similarly … churches and schools were closing, and tithes and offerings began to decline.”

“There was a lot of speculation amongst the financial leadership in the church, “ Robinson said. “We were talking about the potential of very significant decreases because our churches were closing, we wondered how we were all going to survive. Most of us sent our employees home to comply with social distancing mandates that were provided by our local governments.”

But, said Robinson, the church in North America responded well. “By God's grace, I stand on this side of the process in amazement, and I want to preach a sermon or something because of the awesome response by our God and our people,” he said. Robinson first talked about the division’s response of implementing virtual functionality with the pandemic shutdown. He highlighted the “tremendous” institutional innovation, citing It Is Written, Vacation Bible School, Youth and Young Adult Ministries, and other ministries, and services, and institutions for being able to pivot and take advantage of the situation, providing programs, content, and resources virtually. “God really blessed. We basically [became] the North American digital division.”

The use of online giving also soared. “Before COVID-19, the percentage of total tithe received through AdventistGiving was about 22 percent,” said Robinson. “Now it is almost 60 percent. That’s a tremendous increase in the use of online giving, and my thanks goes to that team for putting it together and keeping it running.”

Robinson also thanked “our members, who really found a way to continue their tithe and offering giving to the church in North America. What a blessing!”

Robinson shared that during the spring, the NAD treasury team, along with union treasurers, developed “a $10 million stimulus package from the North American Division that was virtually matched dollar for dollar by our unions to provide approximately $20 million to our local fields.” Said Robinson, “I feel blessed that we were able to come together to provide those dollars , [which were] mostly for our local conferences. Employees at most all levels were retained. And ministry continued.”

“We had to do business from home and the ministry continued,” he shared. “We adjusted our budgets, and discovered, in hindsight, where we were really concerned about how far things might decline, that God had been (and still is) amazingly wonderful in His providence through the membership of the North American Division. I'm grateful to our members who have continued to support us!”

Gross tithe in 2019, Robinson reported, was almost $1.1 billion. Tithe annually from 2016 to 2019 reached $1 billion and was on trend to do the same in 2020 until COVID-19 hit. Because of the pandemic and subsequent economic downturn, there was speculation that tithe might be down 15 or even 20 percent. But, said Robinson, up through September of this year, “we find ourselves only down by less than 1 percent [.74 percent], year over year. Four of our nine unions actually have gains year over year, and the North Pacific Union Conference us up 4.23 percent through September. Our members have continued their faithful giving of tithes and offerings in North America! Praise God!”

[UPDATE: Follow the Funds - Learn How Tithe Is Allocated Through This Simple Explanation.] 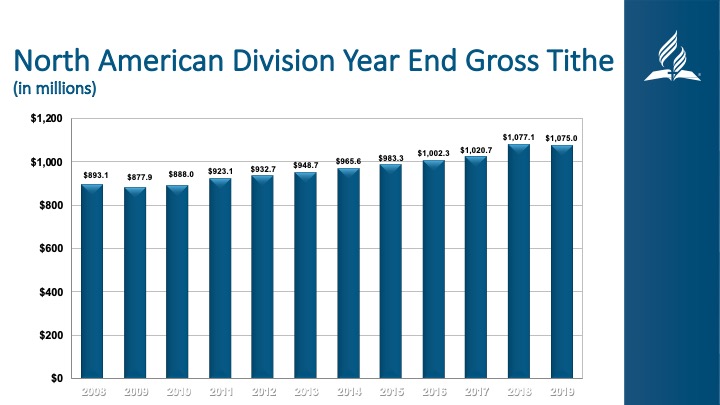 Robinson also presented the YTD 2020 actual financial performance compared to budget. He shared how the 2021 budget proposes less spending than the 2020 budget, and is based on 96 percent of actual 2019 tithe. In addition, 2020 division spending shrunk, due mostly to the halt in travel and decrease in project spending. “The 2021 budget includes an approximately 40 percent reduction in travel from 2020 levels, and approximately a 10 percent reduction in overall project spending. And there is still a hiring freeze in place.”

Tim Aka, General Conference associate treasurer, presented the investment report.  He shared the economic landscape we find ourselves in and how that is influencing the financial markets in the United States and around the world. He shared that NAD investments are down a little over 2 percent YTD 2020, mostly due to COVID-19 created market volatility.

Robyn Kajiura, General Conference Auditing Service associate director (North America area), reported on overall audit performance in the NAD. She explained that of 316 clients (in 2019), 40 percent of which are education related institutions, 74 percent of the audits were completed. Of the completed audits, 89 percent received “standard” or “clean” opinions. She also reported that “clean” policy compliance reports have improved in the past several years.

Edwin Romero, Adventist Retirement administrator/CEO and NAD associate treasurer, provided a presentation during the treasury report, focused on sharing that the eight plans that the NAD Retirement department administers all received “clean opinions” from the external auditor. He also described the funding streams for each of the different plans, both in and out. Romero reported that the NAD Defined Benefit Plan, using certain assumptions, has the possibility of being fully funded in about 15 years. “This is very optimistic and while we don't know what the market is going to show, … we do know that we have a powerful God and we're simply just placing this plan in His hands, hoping that He will see it through.”

Romero thanked the retirement team and the executive committee. “We would like to express appreciation to you for the trust that you have placed in us as we manage $2.7 billion in assets for the church in North America,” he said.

The executive committee voted to receive each of the reports presented. Robinson, at the conclusion of his report, thanked the treasury team for their hard work throughout the year and at YEM.

He finished with a heartfelt comment. “I would be negligent if I did not recognize the God who provides everything that we have. He says in Philippians 4:19, that He will, He shall, supply all our needs. There is no equivocation there: He shall. And He did, and He is supplying all our needs. Not some, not a little, not partial — He will supply all our needs according to His riches and His glory. I'm grateful to our Father in heaven for all that He has provided.”

“God, if You want me to go down there, I have no problem with it. If You want me to leave everything I know, ... and move to Texas, away from everyone—to take on a job that I’ve never done, that I’m not quite sure about—I’ll do it.” This was Robert “Bob” Allen’s prayer eight years ago as he and his wife contemplated leaving their lives and jobs in New York for camp ministry in Texas.

The Adventist Community Service Center of Fort Madison, Iowa, seeks to expand its storage after experiencing an increase in both patrons and item donations. According to the center’s director Janie Warner, the center was so full of donations that it was difficult to walk around inside, which led personnel to set up tables outside for those in need.

It’s always encouraging to hear the words “thank you.” We love feeling appreciated and also hearing it expressed. There’s a good reason for our affection towards appreciation, it’s built into our DNA — we received the trait from our heavenly Father. Expressing our thanks has no expiration date. I discovered this after expressing my gratitude to my former neighbor for her unselfish act of Christian kindness towards me a long time ago.

The North American Division of the Seventh-day Adventist Church (NAD) recently sponsored its annual enditnow Summit on Abuse. It featured professionals presenting on support for children and their families, legal obligations for church members and staff, the threat of pornography, and the dynamics of power and control. The summit was streamed live on YouTube and Facebook on Nov. 14, 2021, in English, and on Nov. 15 in Spanish.