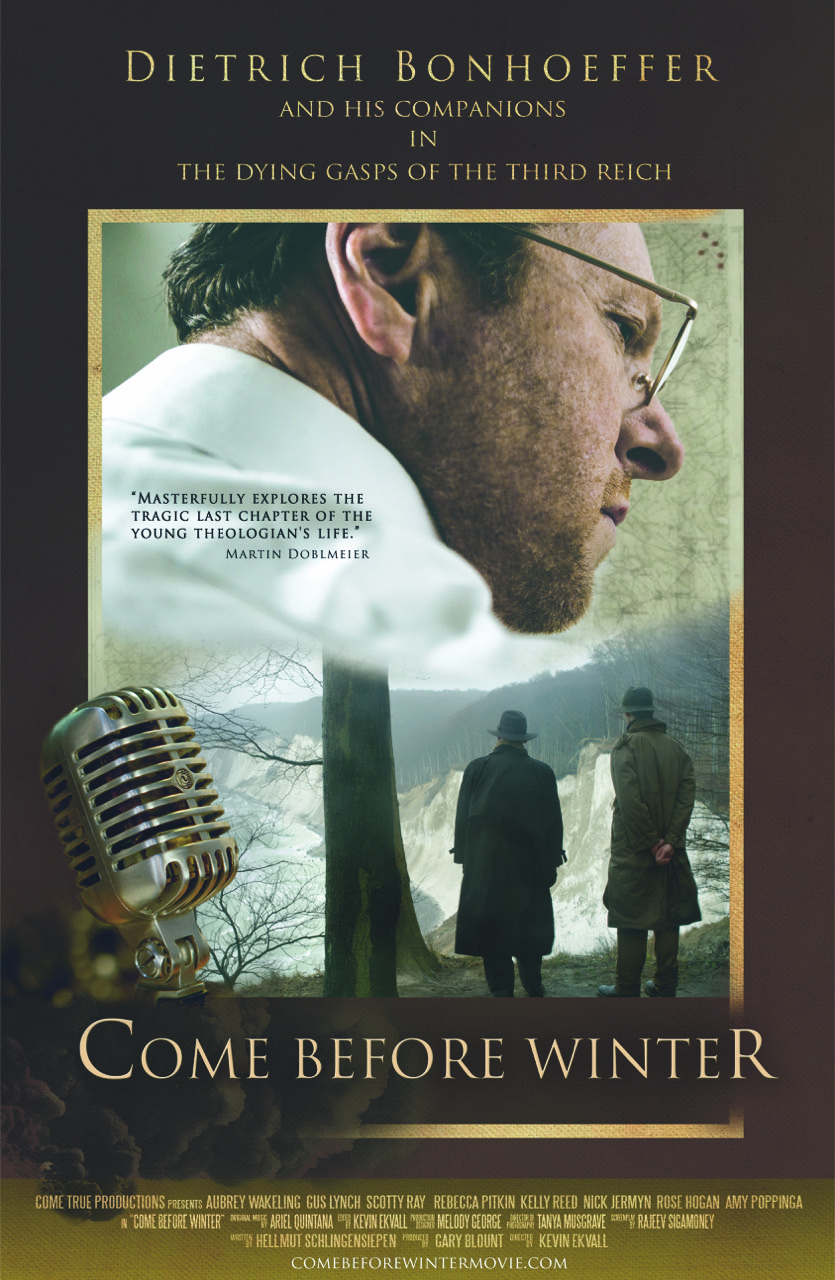 Several alumni of Southern Adventist University’s School of Visual Art and Design took on key roles in a recent film about Dietrich Bonhoeffer, "Come Before Winter." Working with producer Gary Blount, Kevin Ekvall, a 2007 graduate, directed the film, which combines documentary with reenactment. Through the lens of cinematographer Tanya Musgrave, a 2011 graduate, this docudrama highlights Bonhoeffer’s last days from the perspective of a British intelligence black propaganda radio station team. Story consultant and co-production designer Melody George, a 2006 graduate, and assistant director Theo Brown, a 2010 graduate, also greatly contributed to the production of this film, which premiered in the United States at the Loma Linda University Church on Jan. 21, 2017.

Over the course of three years, the team worked together to write, film, and edit this docudrama to create the masterpiece that it is today. To enhance the project’s authenticity, many scenes were filmed in the United Kingdom and Germany, where the events originally took place. Musgrave’s involvement as cinematographer is evident in the interviews overseas as well as many of the indoor narrative sequences filmed in Loma Linda, California. Ekvall explained that due to the varying film locations, “it was extremely important to make sure that the shots worked together in perfect harmony and that the changes in scenery were not evident.”

Throughout the process, the team was introduced to Bonhoeffer’s various writings, which include practical books about Christian spirituality. According to Ekvall, learning more about Bonhoeffer’s impact during World War II was powerful for many of the crew members.

“Although this has been a very difficult process with some pretty big challenges,” Ekvall said, “the fact that someone was willing to risk his life to stand up for injustice and cruelty pushed me to do my best to tell this part of his story.”

“I am very grateful for David George and the other professors in Southern’s School of Visual Art and Design,” Ekvall said. “During this endeavor we had a very small crew, but Southern prepared my colleagues and me to take on a project like this where each of us had multiple roles as crewmembers.”

Kathy Goodridge-Purnell, Ph.D., joins Southern Adventist University as the new senior advisor to the president on diversity and strategic planning. Originally from England with roots in the Caribbean, Purnell is a gifted communicator and leader, bringing decades of relevant experience to the Collegedale campus.

“The CALLED convention was such a spiritually uplifting experience for me, especially the ministry spouses’ seminars. Being in the presence of so many ministry families brought a sense of camaraderie and joy!” exclaimed Heidi Martin, ministerial spouse guest panelist at the 2022 CALLED Pastors’ Family Convention and “Wake up With Hope” co-host.

The Adventist Development and Relief Agency (ADRA) is scaling up emergency operations to deliver food assistance and water to vulnerable communities on the verge of starvation within the Horn of Africa, including Kenya, Somalia, Ethiopia, and Uganda.

Andrews University welcomes Kevin Wilson as the new digital and social media coordinator in the Office of University Communication. Beginning in September 2022, Wilson will oversee the University’s social media platforms, developing and implementing strategy and overseeing the creation of content.

Escape from Home: A PUC Graduate and His Family Flee Ukraine

In January, as news reports about an impending Russian invasion mounted, Andrey Gulko, a Pacific Union College graduate, readied his team in Ukraine for the “worst-case scenario.” Have extra fuel on hand. Keep your car’s gas tank full. Gather together important documents. Pack a suitcase with bare necessities. Be ready for an emergency. They all did it. But nobody believed it. “I myself didn’t believe it,” Gulko said. “I didn’t think it could happen.” The Gulko family, along with millions of other Ukrainians, suddenly found themselves at the center of a crisis that had been escalating for years.