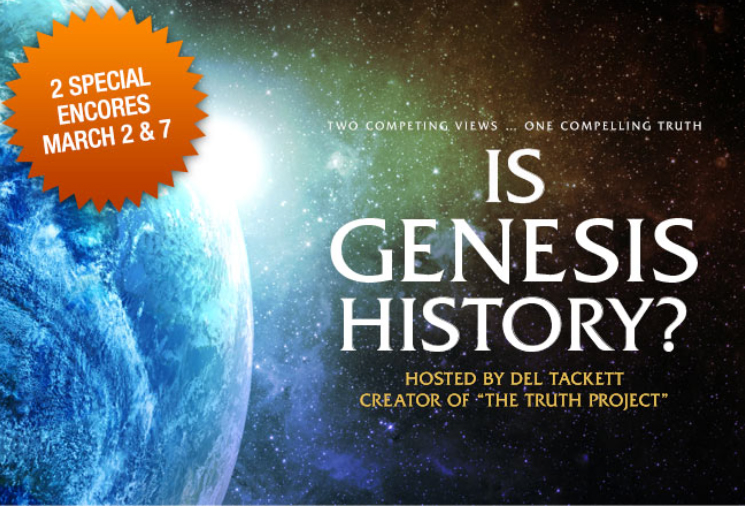 "Is Genesis History?" opened in 700 theaters in the United States on Thursday, Feb. 23.* More than 143,000 people attended showings of this documentary, which features Adventist scientist Arthur V. Chadwick, Ph.D. Pleased with this U.S. box office leading attendance, organizers scheduled encore showings for Thursday, March 2, and Tuesday, March 7. The film will show in limited engagement on March 14 in Canada.

"Is Genesis History?" explores topics ranging from science consistent with the biblical account of creation to the Genesis flood and the way in which Hebrew language is used in the first book of the Bible. It features a wide range of experts in fields, ranging from geology to biology and archaeology. Among these, Chadwick describes his research on dinosaur fossilization.

Commenting on the film’s performance, Chadwick, from Southwestern Adventist University in Keene, Texas, said, “I’m really honored to be featured in a film this successful. Let’s pray that ultimately the data we were able to share is enough to open minds to the profound truth contained in Genesis and the rest of the Bible.”

Chadwick was filmed at the dinosaur dig he leads each summer at Hanson Ranch in Wyoming. At this location, his team of volunteers and scientists has unearthed a massive dinosaur graveyard, revealing important information about how dinosaurs died and were fossilized.

Another Adventist scientist involved with the production is Leonard Brand, Ph.D., from Loma Linda University in California. Brand served as a consultant to the producers, drawing on his extensive experience as a Bible-believing Christian and a scientist. “Treating the Bible as a reliable source of information about the past has opened my eyes to things that I would not have otherwise noticed,” says Brand. “In fact, the Bible has made me a better scientist than I would have been if I had ignored the history it records.”

"Is Genesis History?" is hosted by Del Tackett, a software engineer who served as director of technical planning for the National Security Council at the Whitehouse during the George H. W. Bush administration. Since then, Tackett has extensive experience in education and media. Tackett is known for his role in Focus on the Family’s Truth Project.

The documentary is available for pre-purchase on DVD; shipping not available until April 11.

To find out more about Is Genesis History? visit www.isgenesishistory.com.

— Timothy G. Standish, Ph.D., is a senior scientist at the Geoscience Research Institute in California.

The North American Division honored three retiring vice presidents through a virtual event that gave colleagues the opportunity to express their gratitude and share memories of the outgoing leaders. Alvin Kibble, former vice president for executive coaching, training, development, public affairs and religious liberty, literature ministries, and social media and big data; Paul Brantley, vice president for strategy and assessment; and Gordon Pifher, vice president for media ministries, received heart-felt spoken and written messages on May 12, 2021, from administration and staff about the legacy they’ll leave behind as they enter retirement.

It Is Written Wins 10 Telly Awards

Merely 12 months ago, the Carolina Conference Ministerial Department had hosted more than 1,000 attendees at the fourth annual Evangelism Impact at the Landmark Resort in Myrtle Beach, South Carolina. In this uncertain year, the event went virtual, with a similar number of attendees joining online.

The Seventh-day Adventist Church in Canada mourns with the families of the Tk’emlúps te Secwépemc First Nation and all the Indigenous Peoples of Turtle Island (Canada) following the discovery of 215 unmarked children’s graves at the former site of the Kamloops Indian Residential School.

The annual young adult film festival sponsored by the North American Division became an extended virtual experience through a six-session-long program on Gather.town, a customizable video-conferencing space that allowed for enhanced virtual interactivity among attendees. Sonscreen Film Festival 2021 took place every Friday, from April 2 to May 7, from 4-6 p.m. EDT, on the gamified platform that has been described as a combination of Zoom and the “Among US” video game.